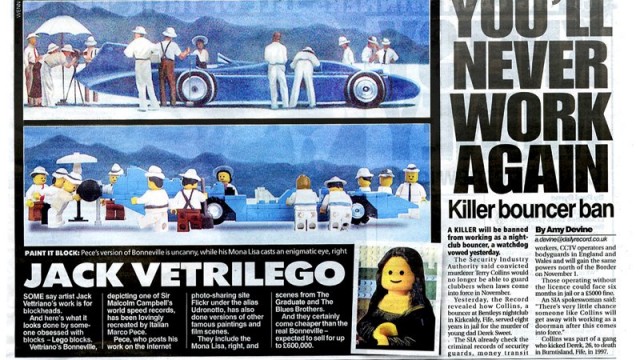 Paint it block: Pece’s version of Bonneville is uncanny, while is Mona Lisa casts an enigmatic eye, right.
JACK VETRILEGO
Some say artist Jack Vettriano’s work is for blochheads. And here’s what it looks done by someone obsessed with blocks – Lego blocks. Vettriano’s Bonneville, depicting one of Sir Malcom Campbell’s world speed records, has been lovingly recreated by Italian Marco pece. Pece. Who posts his work on the internet photo- sharing site Flickr under the alias Udronotto, has also done version of other famous painting and film scenes. They include the Mona Lisa, right, and scenes from The Graduate and The Blues Brothers. And they certainly come cheaper than the real Bonneville – expected to sell for up to 600,000.